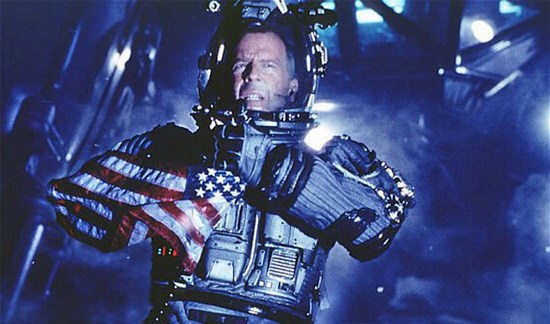 In our favorite existential disaster movies, it takes all of Act I for the scientists to convince everyone that disaster is coming. Then in Act II, an all-out battle to save civilization is launched.

Every resource–personal, governmental and global–is mustered. No expense is spared. No sacrifice is too great. In Act III our heroes fly to their deaths, or are at least willing to, delivering the final blow to the threat.

Think Harry Stamper (Bruce Willis) taking his stand and exploding a nuke on the asteroid in Armageddon. Think Russell Casse (Randy Quaid) kamikazing into the invading spaceship to detonate a nuke in Independence Day ID4. If you like some religion with your sacrifice, think The Exorcist’s Father Damien Karras (Jason Miller) flinging himself out the window to his death to banish the devil.

Here in less-blockbustery real life, we are watching the climate change disaster unfold in sort-of slow motion. Glaciers holding enormous amounts of methane and millions of gallons of water are melting at a rate many times that which which was predicted 20 years ago. That melting is creating an exponential domino effect with each increase in released methane.

So sea levels are rising. 500 year floods now hit regularly. Floods from tides and not storms in Virginia Beach and Miami are a regular fact of life. South Pacific islanders are planning to move their entire populations to higher ground.

Insurers are a canary in the coal mine economic sector here. They’re signaling that certain targets of climate change, such as beachfront homes, are no longer just a risk to be calculated but instead a certainty that can no longer be insured.

The oceans are hotter; producing bigger, more frequent and more violent hurricanes. Temperatures are hotter, creating extended and out of control fire seasons out West. In Africa, desertification is increasing. All over the world crop yields are falling in the places they thrived for generations. Some areas of India and the Middle East are expected to be uninhabitable soon as temperatures now regularly exceed 120 degrees and are reaching “humans’ thermal limits.”

Humanity is not too far off from masses of climate refugees causing global strife.

Is this existential enough? Yepper.

So where are the heroes?

Why are we willing to nuke approaching asteroids but not cut back carbon emissions? Republicans.

Why has the United States refused to ratify the Kyoto Protocol? Republicans.

Why has the United States reneged on its commitment to the Paris Agreement? Republicans.

Why are we stuck in Act I of this movie still pooh-poohing the experts and denying there’s a problem? Republicans.

It’s time for Republicans to man up. Tell Koch Industries and ALEC to pipe down and find a new lane. Do what you’d do if you were Bruce Willis facing the asteroid in Act III. Give it your all. Because humanity depends on it.